GAUO Official Document- For Conscientious Eyes Only
AU15022020
Pertinent Races:
The Yssaril Tribes [Green]
The Embers of Muaat [Blue]
The Emirates of Hacan [Red]
The Naalu Collective [Yellow]
Mission Statement: Use Action Cards Instead Of Sitting On Them
BEGIN TRANSMISSION::
I was playing the Yssaril, and as the rounds started, I took advantage of the Warfare strategy to get a few extra planets early and build a fleet to protect myself. I attempted to ally with everyone at the table, which the Naalu and Hacan agreed to readily enough, but the Muaat player just wanted to shoot. At first, the plan was to ally with the Muaat, who start with an impressive War Sun, but when I offered to move a ship to establish borders I was told I would be shot at if I approached. Thus, the battle began. I threw a few action cards at him as he charged for Mecatol Rex, as a deterrent. 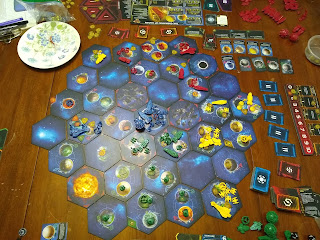 This first picture was taken around round three, when the Muaat finally made it to Mecatol Rex. He was already determined to come after me, and I decided to use the Nebula to prepare a preemptive strike. I built three Dreadnaughts on Abyz and Fria, which put a chill in every player, yet I knew that this was a fleet that could only stand ground against a War Sun. You can see already that the Naalu have a slight lead in the Council.
It should be noted that just before I attacked Mecatol Rex, I almost struck an alliance with the Muaat by offering my Spy Net. One can only imagine the fire of the Guild of Spies-backed Muaat galaxy... because AU15022020-B is inaccessible. The Muaat only wanted to burn. 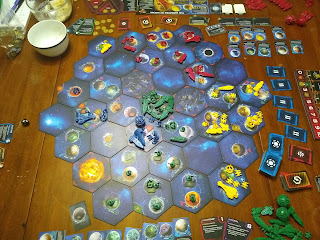 On round four I swooped in with my fleet, yet the Muaat escaped into the Nebula. My greatest regret is forgetting to sabotage that action card; I could see quite clearly the imperial throne slipping from my grasp. With the Muaat fleet maneuvering into the Nebula, I couldn't fight back until they emerged on the other side- into my unprotected planets. The psychic powers of the Naalu grew unimpeded, while the Emirates of Hacan watched bemusedly, gaining vast riches. 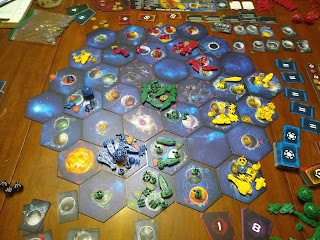 The Muaat attacked Arnor and Lor, as well as Coorneeq and Resculon, but I was able to scare their precious War Sun away from the latter, containing them to the -Or system. I had a store of 15 action cards to stall them out, and when the time came, to force them out of Yssaril space for good. Not pictured: Naalu gaining victory points, large mass of Hacan trade goods. 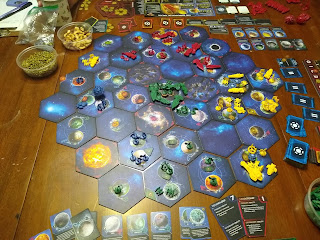 The Sun had been extinguished, but at what cost? I sent all of my forces at his after building a carrier and even more fighters, used five action cards, including two direct hits, and only managed a draw. The throne was out of my grasp, but the Muaat's light would be snuffed out. 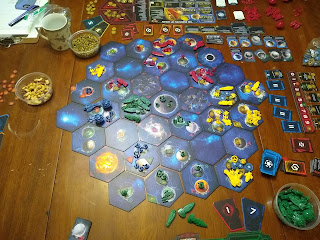 Here are we are at the end of what I believe to be round five, when the Naalu Instrumentality Project reached completion and they assumed control of the imperial throne. I believed my fleet to be up to scratch against two War Suns, but in the battle we fought after the game, I was not ready. Do not underestimate the power of the Sun.
I did use a lot of action cards, so that was a success... only after forgetting probably five times I could have used them, though. I got on the ball by the end.
::END TRANSMISSION
GAUO Official Document- For Conscientious Eyes Only
Posted by Trans Purple Worm at 7:03 PM No comments:

I ran a game of Blades in the Dark last weekend, and have been thinking since about how we build narrative in tabletop games. I'm currently playing in a campaign running a modified version of The Black Hack, which has an elaborate and enrapturing plot, but I have had less luck in the past in building that level of complexity, so I'm going to work my way from that to Blades. Hang in there.

In The Black Hack and similar DnD-type games I have been in, the locus of play is all about combat, with the escalating forces being bigger battles. Of course one can weave a larger, more complex story out of it, but as these games arose out of wargaming, it can be felt that the mechanics sing most when fighting and not as much at any other times. When I first started running games as a teen, I only saw those mechanics, and it frustrated me to not have any textual narrative building blocks on hand.  The absence of mechanical tools for storybuilding allow for a very uniform, unvarying game which can be fun for relaxing with friends, but puts all of the onus on the GM's writing ability for building the arc for the game and interest in the story.

One of the most powerful things about Apocalypse World and its children for me was the additional mechanical support for forces of narrative. In the smaller scale, this comes out through partial success, introducing complications until things naturally boil over one way or another. In contrast to DnD, a roll is not done simply when an action takes skill, but when an action has a narrative purpose: characters are allowed to simply be badass for aesthetic or establishing moments. In a campaign of Monsterhearts I ran, these partial successes often climaxed in players facing off against one another in the woods at night, one side coming out permanently changed. In the larger scale, Apoc. World has a Threat Map which helps show the players what narrative threats loom. It gives visual cues to what is happening narratively.

Finally we reach Blades in the Dark, which has heavily mechanized narrative for both session and campaign play. Sessions include not just partial successes, but phases of play, from a free play, to an engagement roll which sets off the session's big score, to some very regimented downtime, in one session of play of which characters relocated their secret base, consorted with ghosts, and were arrested. As for the campaign play, I was daunted at first by the size of the faction sheet, but as soon as we started playing I realized I could very easily ignore almost everything except for the people in the fictional vicinity until the direction the party was headed was clear. The whole session had rising action, a climax, falling action, and hooks for the next one with minimal effort on my part. It’s fantastically refreshing to have the weight of plot taken partially out of my hands and carried by systems.

Posted by Trans Purple Worm at 11:21 AM No comments:

Hey okay so I saw this picture and I been thinking about fantasy races so here goes. Also I don't have a name for them so they're called AirFolk, because we met a WaterFolk lady in the current long-form game my group is playing and she's basically an alien of the Furthest West, and so here's my petition to the GM for the aliens of the Furthest North. She Got Wings
So AirFolk are born real small from the vestiges of prior AirFolk, which will make sense at the end of their life cycle. They're basically real small, dense people, like maybe a centimeter or less? They have a memory that is passed down from previous AirFolk, like they way you remember who you were 30 years ago? Anyway they live to be about 30 and they have indeterminate growth that's kind of exponential so they get real big, like 20-50m in their latest years; a 20yo would be 2-3m probably, and is the equivalent of human middle-age.  When they get real old they get what's called the Vapours, which is when they start to become less solid, and eventually they phase into like a misty tornado-wind thing, spooling whirls that become new AirFolk, with fragments of their memory.
They have 4-10 wings and are made entirely of cold wind, but a solid type of wind, like... gelatin, or feathers. Their skin ranges somewhere between snow and mist and the sky at night, depending on the atmosphere of their whorling into being.
That's all I got.
Posted by Trans Purple Worm at 6:01 PM No comments: 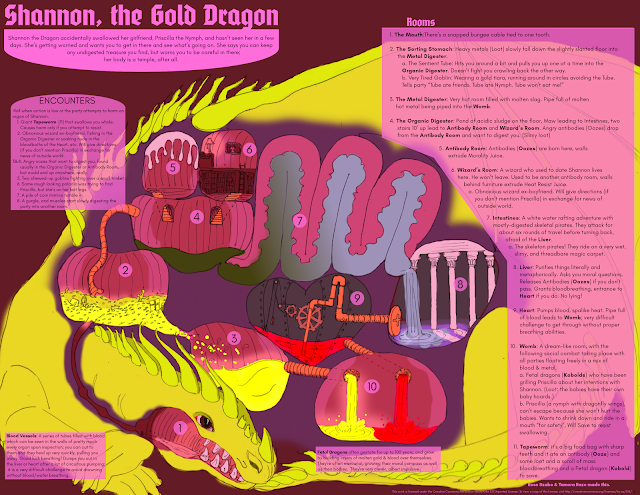 HI! I made this with Rose for the 1 Page Dungeon Contest. A full quality version can be found HERE!
UPDATE, we got in the winner's circle with the dang thing! I love my big dyke! We got Blades in the Dark and so we're gonna go eat ghosts in a few weeks!
Posted by Trans Purple Worm at 10:30 AM No comments: